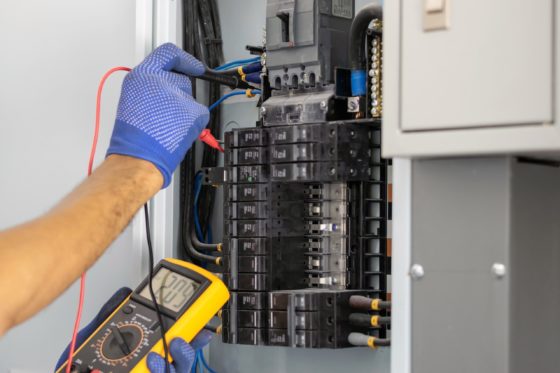 Your home’s circuit breakers serve an extremely important purpose by instantly cutting off the power to circuits in the event of any electrical issues. Without working circuit breakers, any electrical issues could potentially start a fire or even electrocute you when you turn on the lights or plug something into an outlet. While this is obviously great in terms of safety, it can still be frustrating when you have a circuit that is constantly getting tripped. Even if resetting the circuit is as simple as turning the breaker back on, it is still important that you understand what a tripped breaker means and what could be causing the problem.

How Does a Circuit Breaker Work?

Your home is filled with many different electrical circuits, and each circuit provides electricity to power the lighting and/or outlets in a room or part of your house. Your home will also have dedicated circuits for most of your larger or more powerful appliances. This includes things like your oven, furnace, air conditioner, water heater, washing machine, and potentially even your microwave. All of these circuits are connected to your main electrical panel, which feeds electricity from the power grid into your home and then to each circuit.

What Can Cause the Main Circuit Breaker to Trip

In addition to having breakers for each circuit, the electrical panel also has a main breaker that controls the power to the entire house. As with the smaller breakers, this main circuit breaker can also trip. In some cases, it can trip due to an issue in a specific circuit, but this is usually quite rare. More commonly, the main breaker will trip due to things like lightning strikes and surges in the power grid or if the total electricity usage of your home is higher than the system can handle.

The most common cause of a tripped circuit breaker is an overload in that circuit. Each circuit is only intended to carry a certain electrical load, and if it exceeds this load, it will cause the breaker to trip. This is important, as overloading a circuit can cause the wiring to heat up and potentially create a fire risk. In fact, it is actually this excess heat running through the circuit that causes the breaker to trip.

Each circuit is designed to easily handle the estimated load for that circuit, whether it is for lighting or powering your appliances. Still, the circuit can quickly get overloaded if you try to power too many things at once or use certain appliances that draw much more power together. For instance, appliances like microwaves and hairdryers both require relatively large amounts of power and can easily trip the circuit if it’s already near its load capacity.

Overloads are fairly common and are usually quite easy to pinpoint. If the circuit tripped when you turned on the lights or as soon as you plugged in or turned on an appliance, it is likely that those actions overloaded it. In that case, the best thing to do is to unplug some things to lessen the load on the circuit and then flip the circuit breaker back on. If the breaker immediately trips again, it is a sign that you’re dealing with a more serious problem than an overload.

Short circuits are also a common cause of tripped breakers. All of the wiring in your home consists of three separate wires: a black live or hot wire, a white neutral white, and a bare copper ground wire. Short-circuiting occurs when the hot wire comes into contact with the neutral wire, the copper ground wire, or any type of metal. When this happens, it eliminates the electrical resistance and allows too much current to flow into the circuit, essentially overloading it.

A short circuit can occur for numerous reasons, such as damaged wiring or loose connections. The problem could originate in the wiring itself or at an outlet or light switch. Appliances, cords, and power strips can also short circuit for the same reasons. This is especially common for older appliances or if the power cord is damaged.

Short circuits are generally a much bigger problem than a circuit overload, as they can potentially create a risk of both fires and electrocution. If the circuit is not overloaded and the breaker keeps tripping, it is essential that you immediately contact a professional electrician to determine the source of the problem. With a short circuit, you will usually also notice a burning smell or even see smoke. If the short circuit occurs in an appliance or the outlet itself, you may also see discoloration around the outlet.

A ground fault surge is a specific type of short circuit that occurs when the hot wire touches either the ground wire or a metal electrical box that the ground wire is connected to. Ground faults can be caused by poorly insulated or damaged wiring inside your walls or in your appliances. They can also result if water gets into your outlet. As with short circuits, a ground fault surge will usually result in a burning smell and discoloration around your outlet.

Ground fault surges can potentially be even more dangerous than short circuits. This is especially true when the ground fault is caused by water, as this can potentially lead to electrocution. For this reason, all new homes are required to use GFCI (Ground Fault Circuit Interrupter) outlets in basements, garages, bathrooms, outdoor receptacles, and kitchens, as well as for any outlets located within six feet of a water source. These GFCIs provide an extra level of protection and essentially act in the same way as a circuit breaker specifically for that outlet. In the event of a ground fault surge, the GFCI will kick in and automatically switch off the power to the outlet.

In some cases, your circuit breakers might be tripping, not due to a problem with the circuit, but with the breaker itself. If your breaker or your electrical panel is old, faulty, or not wired properly, it can also cause the breakers to trip. Still, this probably is generally quite rare.

If one or more circuit breakers in your home keep tripping, Black-Haak has the knowledge and experience to help you find out why. Our team of professional electricians can diagnose and repair any electrical problems you may be having, and we can also assist with rewiring, lighting, generators, and home automation systems. Our team also consists of highly trained HVAC technicians and licensed plumbers that can take care of your home’s heating, cooling and plumbing systems. We are located in Greenville, WI, and serve customers throughout Fox Valley and the surrounding areas. To schedule an appointment or get more information on any of our services, give Black-Haak a call today.